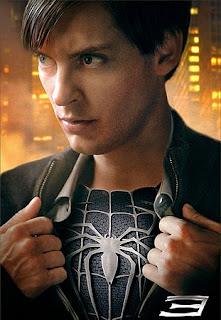 Spider-Man 3 is a limp, lame and turgid film that fails on a number of levels. Like last year's largely unsuccessful Superman Returns, it's sadly lacking in excitement.

The melodramatic interludes played out between Peter Parker (Tobey Maguire) and long-suffering girlfriend Mary-Jane Watson (Kirsten Dunst) lack conviction, and the film's three super-villains, the Sandman, the Green Goblin and Venom, are hurled into the story so quickly that their backstories are thinly drawn and perfunctory.

The pacing is off, too; quite simply, the film just falls flat, especially during its so-called climax.

The most laughable point comes when Peter, always the nerd-next-door, suddenly goes all emo, complete with eyeliner and fringe, thanks to the influence of the spoooooooky black Spider-Man suit. It's all too silly for words.

Avoid as you would a trapdoor spider. Spider-Man 3 sucks.
Posted by richardwatts at 12:10 pm

Gee, I liked this film. As I mention in my review, I've read many complaints in various places that I can't really agree with except one - it's a bit too long.

The Sudden Emo was met with bemused giggles throughout the packed suburban cinema when we went. It really is quite shameless, isn't it?

And we don't ask for much when it comes to how villains got their powers. But seriously, the Sandman. 'Oh, these light thingies spun around me, and then I, like, got turned into dirt and shit'. Bitchslap our suspension of disbelief once more.

Though I loved Stan Lee as Stan Lee. Bahaha!

I thought the emo reference was funny. I mean, come on, a trend that big doesn't go into a move unintentionally. I think they made him sort of "emo" looking, expecting it to be funny. I thought the movie was good.